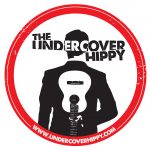 Billy Rowan, aka The Undercover Hippy brings together soulful vocals, infectious reggae rhythms, and the lyrical delivery of a skilled mc. Billy and his band are renowned for the electric atmosphere of their live shows. Starting out as a solo act in 2007, he has since teamed up with some fantastic musicians and performs as a four piece, mixing guitars, keys, drums, bass, and backing vocals to create a high energy, interactive and highly entertaining live show. Combining intelligent, provocative lyrics with dangerously catchy hooks and a feel good groove, this is music for the thinking person to shake their arse to.

As their last album Monkey Suit continues to clock up over a million streams and sales, the band have been touring relentlessly, with over 80 shows and festival appearances across the UK and Europe each year. Covering topics from fake news, internet privacy and the U.S. election, to nappy wearing barristers, this album once again takes you on a rollercoaster of storytelling and thought provoking protest pieces.

“Delivers big, weighty messages with an optimistic and entertaining light-heartedness”
On The Beat (review of album launch)

“A powerful masterpiece… weaves together humour and shrewd political commentary to create a catchy, fun and renegade modern protest album that could not be more relevant”
On The Beat (review of Truth & Fiction)

“Politically charged reggae that sticks two fingers up to the powers that be”
Fresh on The Net, Christopher McBride

“This is about as real as music gets!”
Andrew Marston – BBC Introducing

“Ten tracks of excellence…nothing short of a triumph! 9/10”
Due South West

“The Undercover Hippy kept me thoroughly entertained with singer songwriter Billy Rowan’s amusing observations delivered via his witty lyrics and catchy choruses. This Bristol band has mastered the art of imparting political ideals on an audience who were totally involved with their MC style vocals and chilled reggae vibe.”
eFestivals.co.uk review of Eden Festival 2015

“His combination of catchy tunes, rhythmical vocal style, and socially aware (but often amusing) lyrics, is a recipe that is difficult to nail without seeming preachy or dull, but Rowan succeeds where many fail.”
eGigs.co.uk